On May 13th, 2016, De La Soul is Dead will turn 25 years old. As my favorite album of all-time, I aspire to write a 33 1/3 oral history about the making of, reception, and legacy of the album to coincide with the anniversary. So far several people have been kind enough to talk to me at length, including 7L, 88 Keys, DJ Neil Armstrong, and Prince Paul.

I've decided to share a snippet of my interview with Paul where he breaks down the equipment and creative process that was used to make DLSID. If nothing else, I hope this interview sparks conversation about DLSID and gives people an inside look at what it was like produce sample based music during the early 90s. 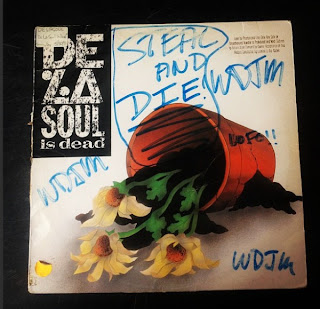 DJ Sorce-1: Everyone I interview about De La Soul is Dead mentions how the production stands out, especially for the time. Given the equipment you guys were using, it’s crazy that the beats are so layered and all of the samples are perfectly on beat and in key.

Prince Paul: We had the experience of making the first album to give us a better idea of how to do it on the second album with the equipment we had. It’s funny, at the time that equipment was considered kind of new. Making records before those samplers was hard. On De Le Soul is Dead, we were like, “Wow, we can lock things up, we have delays, we can move samples around, and we have pitch shifters.” Now you could probably throw it in the computer and slap it together in two minutes. But at the time we thought we were ahead of the curve in technology.

DJ Sorce-1: I know in talking to you for an earlier interview that you guys were using an Akai S-900, an Emu SP-12, and a Casio SK-5 on 3 Feet High and Rising. Did you use the same equipment for De La Soul is Dead?

Prince Paul: Yeah, we used all of the same stuff. We were at the same studio, we were at Calliope. I think we mixed the album at Island Media in New York. We basically used the same format.

DJ Sorce-1: When you say SP-12, I've heard people abbreviate the SP-1200 by saying SP-12. But they are two different machines. Were you using the earlier model?

Prince Paul: Yeah. The SP-12 doesn't have a disk drive so you can't save the samples. The 1200 has a floppy disk drive that you can save your music in. So we had an early one, the very first one. 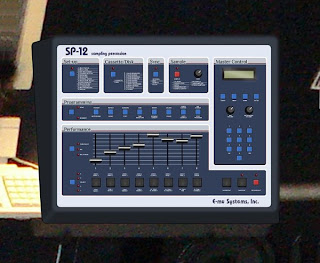 DJ Sorce-1: I’m amazed that you guys were utilizing an SK-5. I know that's a pretty limited sampler. Did you just use the external mic device to sample?

Prince Paul: I honestly don't remember. I still have that sampler, but it's in my attic. I think there was a mic input and it also had mic built in on top of it that you could speak into. I think we just plugged into the mic input and sped samples up. Obviously the sound was kind of jacked up, but nobody was concerned about quality back then. We were just impressed by the novelty of sampling. Everyone was like, "Ooh, I can take a piece of something and play it on a keyboard.” 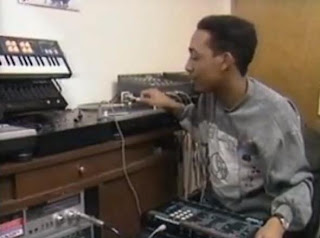 DJ Sorce-1: Did you have a favorite sampler that you were using at the time?

Prince Paul: Probably the S-900. I could navigate that pretty easily. I broke it out recently because I have a couple in racks in my basement. I plugged them in and played some old samples through them. Even though it's big and bulky, nothing sounds like that. It’s pretty flexible, it's easy to work, and it's easy to truncate your sample and get things tight. You can trigger certain sounds with different keys on the drum machine.

When you look at all this new technology, everything sounds very sterile. Everything is clean and super quiet. It kind of lacks something. When I plug that in, it's like, "Wow, this is hip hop." It makes a big difference...a way bigger difference than having an MPC or something. It has its own character.


Prince Paul: Yeah. Certain pieces of equipment make you program a certain way because you are limited. That's the beauty of those machines.

DJ Sorce-1: I’m curious how Tommy Boy responded to the album. 3 Feet High and Rising was so successful, was there an outcry when you submitted De La Soul is Dead? I would assume some people were worried about how dark and different it was.

Prince Paul: They were pretty supportive, basically because we were tried and tested. The success of 3 Feet High came as a surprise to everyone. After it came out, we were able to come in and tell them what we wanted and how we wanted it done because we were so ahead of the curve on everything. They couldn't figure out our thinking, our sensibilities, or how we created. They were like, "You tell us what to do”, which was nice. It was nice to have a little more control over your projects. A little more respect, I should say. 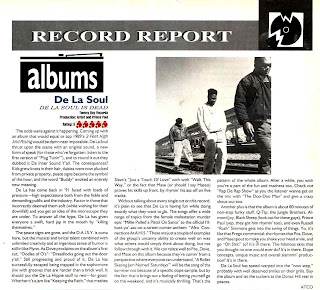 DJ Sorce-1: I know the way you were getting financially compensated by Tommy Boy might not have been ideal, but it is cool that you were given that level of creative freedom.

Prince Paul: On the first album, there were concerns. They had Dante come in and more or less be their eyes and ears so that he could report back to them. On the second album they said, "You guys know what you’re doing. We trust you. Make those records you make." It was cool. I think their main concern for the second record was keeping track of the samples because they had messed up the first one so bad with clearing the samples. 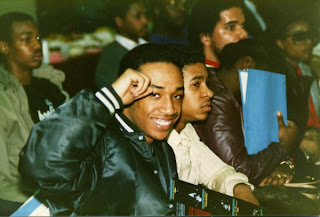 DJ Sorce-1: That seems to always get overlooked when people discuss this album. De La Soul is Dead was made after a sample lawsuit against you guys that was pretty historic…and it’s so sample heavy. Especially when I look at the sample list for "A Roller Skating Jam Named 'Saturdays'"; you have seven or eight samples that make up that beat. For a label to clear that many samples seems unfathomable by today’s standards.

Prince Paul: Yeah. It’s just how we made records in those days, so it didn't seem uncommon. Once Tommy Boy became so concerned with making sure to get every little sound was cleared, it made it a little different than the first album. The first album, when it came to sampling, they were like “Eh, whatever, you guys probably won’t sell that much anyway.” But when it was all eyes on De La they were keeping track of every sound we used. Even with stuff that wasn't sampled. They were really anal about a whole lot of sample stuff, which is understandable. But having the lawsuit wasn't our fault to begin with. We were like, “You created this problem. We’ll always give you all of the sample information, that’s without a doubt. How you guys retain the information and what you do with it is up to you.” 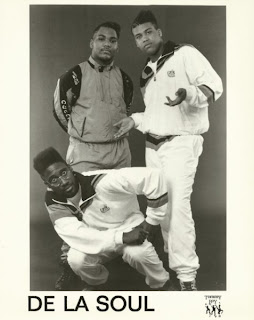 DJ Sorce-1: The composition of the samples is incredibly impressive. I’m curious if any of the beats stand out as being particularly difficult to compose. For instance, on “A Roller Skating Jam Named 'Saturdays'”, you have the baby scratching, the drums, the “and roller skates” vocal, and then the main loop comes in. And I’m only breaking down the beginning of the song. How difficult was it to get all of that to sound right?

Prince Paul: It’s all about the arrangement. Pos came up with the main loop and a lot of the other ideas for that song. I showed De La a lot about how to navigate through the equipment and how to make everything layer properly. The key to making it work isn't necessarily how much you layer; it’s how you arrange the samples. You have to put samples in key so everything sounds like it belongs. How you EQ everything...there’s a science to it. 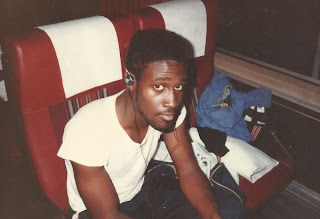 Early Public Enemy production used layers upon layers and layers, and their arrangements were always super duper incredible to me. We were kind of like students to what they did. To me, our production didn't even come close to what they were doing…almost like a fake version of how well they sampled and meshed stuff together. (Laughs) It makes it easier when you have a blueprint of what to do or how to make something sound. When I listened to Public Enemy, my guidelines were for us to always be high quality. To me, what I was making wasn't quite at their level, but it was good enough. (Laughs) 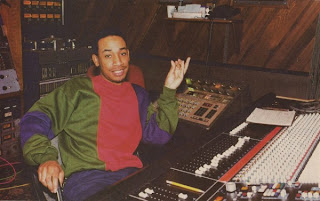 DJ Sorce-1: I think today’s equipment makes it easy for people to arrange samples so that everything sounds in key. With the equipment you were using, I would think that you either had some technical musical training or you just had an incredibly good ear for hearing what went well together.

Prince Paul: A lot of the engineers that we used were also musicians. We wouldn't always go by what they would say, cause engineers will make you do some real stupid stuff, but it’s always good to get another opinion. And a lot of it was us just listening. If we cringed at something, we’d say, “That’s wrong” and adjust it until it sounded right. There might be things you try to put together that don’t mesh well, so you know not to put them at the same time during the song.

The bulk of it is feel and the other part is common sense. It’s like putting clothes together. You’ll say, “Oh my god, I love this hat, this jacket, and these pants”, but they might not all go together. You have to rock them in different ways with different shoes, shirts, and whatever else. Even though in your gut you want to rock them all together, you have to get that out your mind. Same thing with music. Everything has to fit right; you can’t force things together just because you like them. 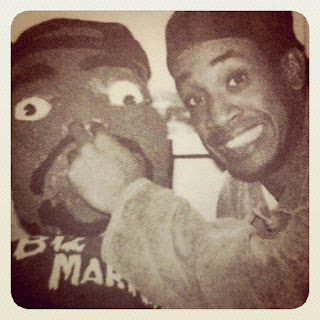 (via Prince Paul on FB)

To learn more about the making of De La Soul is Dead (and other De La albums), check out this interview I did with Paul a few years back for The Smoking Section.

This is also one of my favorite albums. I remember when it came out, it was too deep to get into all the way. Seems like every time I listen to the CD I hear something new and I listen to it A LOT!

Agreed. I've listened to it countless times and I'm always discovering new, subtle elements that I did not notice before. The production is mind blowing, especially when you think about the equipment they were using.

Thanks for reading/commenting. If you are interesting in checking out my new writing project, you can head over to https://medium.com/bookshelf-beats.