This is one of those routines that made me want to become a battle DJ. Sadly, I always sucked at beat juggling and was at best an average scratcher. Oh well. This routine still kicks ass, and I still rock it on my ’96 DMC US Finals VHS to this day. Swamp truly shocked the entire battling scene as he took out heavyweights like Babu, Mista Sinista, and Melo-D. You can tell the audiences surprise by checking their reactions throughout his set. Enjoy.

Even If You Hate Soulja Boy....

Even if you hate this cut, you still have to respect the drum skills. Travis Barker is a fucking monster on drums. True story. 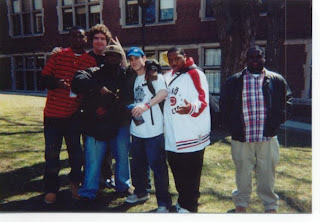 Little Brother performed at Clark University’s Spree Day 2003 while I was a freshmen there. I had just heard “Light It Up” and “Whatever You Say” and instantly was a fan. Spree Day is essentially a drink all day and see live music outside until you pass out affair, and my first one was no exception. After ripping about 10 cheap vodka shots in my friends dorm room, me and my buddies headed out to catch some of the early acts. We ran into Little Brother en route, and I drunkenly started talking to them. Photos were snapped, pleasantries were exchanged, and then they hit the stage to get down. Some goofy looking white kid knowing who they were apparently made an impression, because they started shouting me out during their sound check. Next thing I knew, as their set was coming to an end, their manager came over and told me to go up onstage for the last few songs. As I climbed the stage, a bunch of people decided to follow my lead, and before I knew it I was going crazy onstage with Little Brother and a bunch of college students. It was without question of the greatest concert moments I’ve ever had, and I still remember it clearly…well, maybe not clearly, but I still remember it.

I recently got a chance to interview 9th Wonder for The Smoking Section. I debated if I should mention who I was in the beginning to see if he remembered meeting me. I decided to go for it, and to my surprise, before I could even say the name of the school we had met at, he said, “Are you the kid from Worcester, MA?” He still remembered, over four years later. Here are some photos of that memorable experience and a link to my interview with one of raps elite producers, 9th Wonder. 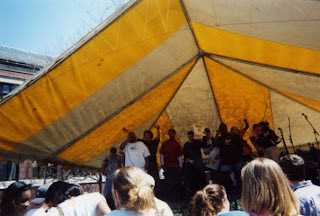 A shot of me onstage from the crowd.
Posted by DJ SORCE-1 at 2:10 PM No comments: 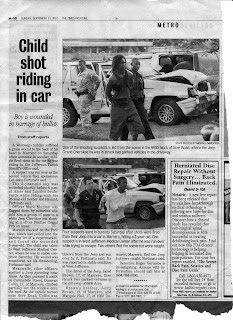 My friend Ethan Brown, author of Queens Reigns Supreme, recently sent me this article. According to him, "This is actually typical of what happens in New Orleans nearly every day." Although this is certainly an extreme case due to the young age of the victim caught in the crossfire, it is a telling incident. The FBI just released a report that violent crime rose 2% in the past year, with big city murders also increasing by 1.8%. With the economy in rough shape, and a strong possibility of a recession in the near future, will violent crime continue to spiral out of control? I'm not known for getting into politics on this blog, but there is more to life than art and entertainment.
Posted by DJ SORCE-1 at 1:36 PM No comments: