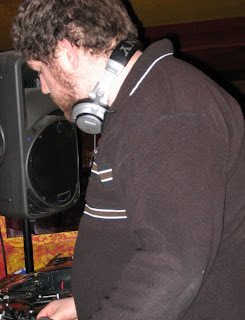 If you want to hear some of my music, check out my Myspace Music page by clicking here. Add me as a friend, and listen to some of the audio samples. You can check out a sample of a CD I started but never finished titled Wherever I May Find Her. It was supposed to be a semi-autobiographical love story told through music and movie dialogue. Please let me know what you think and post some feedback.
Posted by DJ SORCE-1 at 1:04 PM No comments:

Maja Kirstine is Down With Us

Big, super, crazy, heavy in the streets shout out to Maja Kristine. She obviously likes stuff, because she is the first person to leave a comment on one of my posts. I didn't realize that anyone even knew this blog existed or visited it yet. Thanks Maja!
Posted by DJ SORCE-1 at 9:22 AM No comments:

Watching this video is like having dental work done while you're stoned. It kind of sucks, but it's also fun at the same time. Ok so maybe nobody else has had that experience. The point is, you have to watch this. I can't believe that a record label, album producer, and video director all gave this song and video the green light. The video is so fucking tweaked out, and why is Eddie singing like that? His voice sounds nothing like that any other time I've heard him speak. Watch for the high/lowlight when the little kids come out and start dancing next to MJ. Umm...it's akward to say the least.
Posted by DJ SORCE-1 at 12:26 AM 1 comment: 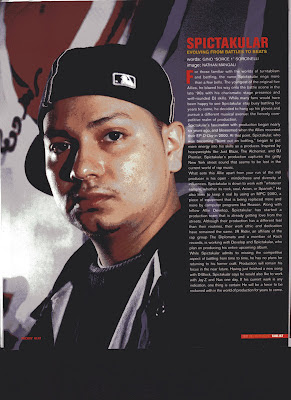 When I was a freshmen in high school (1999), I came home one day after school and started channel surfing. I was surprised to find that a DJ battle/hip hop show was being shown on the local public access station. I started to watch, and after about five minutes a DJ named Spictakular took the stage. Immediately I could tell he was gonna rip it up. He started his routine by dissing all the other DJ's in the competetion and proceded to absolutely destroy doubles of "Off The Books" by The Beatnuts. The very next day I started saving for my first pair of turntables.

Although I have yet to accomplish anything in the world of DJing, I give a lot of credit to Spictakular for inspiring me to buy turntables. Spictak left the battle circuit shortly after I started following him, and eventually I lost track of what he was doing. Much to my suprise, in the spring of 2005 while studying in London I was given an opportunity to write about the man who made me want to be a DJ. Tablist magazine, a now defunct publication about Turntablist and DJ culture gave me an assignment to do a short interview/feature on him. Although I don't think it's the best thing I've ever written, I am still proud of the fact I got a chance to interview Spictakular and write a published article about him. You can check it out here by clicking on the image above.

Point of Interest: Dipset fans will immediately notice the typo about artist JR Writer, who I mistakenly wrote up as JR Rider. Jeaaah.
Posted by DJ SORCE-1 at 4:40 PM No comments: