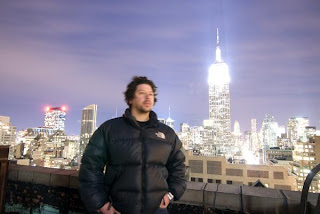 Claim to Fame: I'm a pretty well known DJ from Philly. A lot of people know me from my Love Break mix CD series. I'm also one-third of a Brooklyn based DJ crew called The Rub. We do our thing and have put out a lot of remixes. Representing: Brooklyn, NY and also Philadelphia 'til the day I die!

Years in the Game: I started DJing and collecting records seriously about 18 years ago, but I've been buying music since I was a kid. My very first record was a 45 of Elton John's "Bennie and the Jets." A few years later I went and bought Newcleus' "Jam on It" and I never looked back. I've come to the resignation that it will never really stop. I use Serato to DJ now, but even so I still buy wax pretty much constantly. Best Digging City or Town: Philly used to be so good back in the early 90’s and you can still catch some spots on the low with heat. Detroit has been really good to me recently. I've definitely come up in places like Ocean City, NJ and other random, unexpected places where people were listening to crazy ill shit. Provincetown, MA used to have the crazy ill disco 12"s, I guess because that town is a really popular resort for the gay community. Pittsburgh, PA and Baltimore, MD have been good to me as well. There's a place in Calgary up in Canada that's ill called "Record World" or something like that. It's so big that whenever I go there I have to limit myself to searching for only one particular genre. One trip I'll do only folk music, another time only 80s 12"s and shit. I've always had luck in towns that are around army bases. It seems like soldiers will have a really good collection when they're stationed somewhere, but when they ship out to wherever they have to go, they dump all their shit at the local thrift store. I've definitely come up in those small towns. But fuck it; you can always get hot shit no matter where you're looking. I don't believe that any one particular city is entirely picked over, because people are always getting rid of their vinyl.

Most Prized Piece of Wax: Probably my original copy of East of Underground, and not just because it's a super rarity or that it's the first record I spent over a grand on. It's just such a great record, and their version of "I Love You" was what my wife and I had our first dance to at our wedding. And it was her choice! Other than that my feeling is that the whole is greater than the sum of its parts. There's such a sentimental value to the 45s that I raided from my mom's basement, and the rap 12" that I first bought when I started DJing that laid the foundation for my collection. Honestly, at the end of the day it's just a material possession, but it's what the music does for me that really matters. Total Records Owned: Over the years I've tried to skim my collection of all the fat and just keep the really good pieces and serious heat, but all in all that's not easy when you buy and listen to everything. Right now I would say that my collection is about 15,000 12"s and LPs and a couple thousand 45s, split between my apartment in Brooklyn and my mom's basement in Philly. Best Digging Story: There are so many, and the long road of digging has been the best story in itself. One story that first comes to mind is about this old pet food store that I used to pass by while walking from my house into town. I used to pass this spot all the time and I never even thought twice about it. One day I was walking by and they had a few milk crates outside. I stopped and flipped through them and pulled some HEAT. Immediately I had to go inside and see what the real score was. I’m inside this place and it's a mess. It’s stinking of cat piss, shit, and all sorts of terrible animal odors. I swear it was one of the worst smells ever. So I go in the back and there are cardboard crates of vinyl hidden in this back room and I'm sorting through the entire thing with my shirt over my nose.

The way that the crates were, you had to get down on your knees to sort through them. Within a few minutes I'm covered with cat hair and kitty litter that's scattered all over. But then I started pulling out some bangers. I first pulled Harlem River Drive. And then right after I pulled out an entire collection of Strata East records. 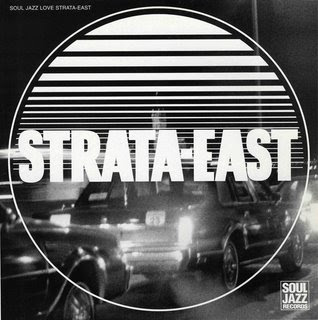 Most of the records were in pretty good condition, but some of them I had to salvage because they had kitty litter literally caked onto the sleeves. Some of the shit I pulled couldn't be saved but you know I had to grab them anyway. I pulled the records that I wanted and brought them up to the dude and he was like, "$1 a record." I said, "Okay, sure." It's a dirty job sometimes but you got to do it. And that's what diggers are like…they don't give a fuck about any of that shit and will do anything to score some heat. 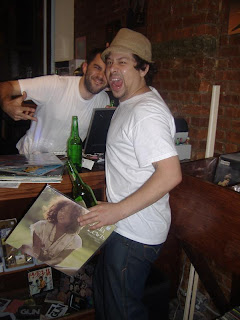 Around the same time in the early 90’s I was working with my friends who had a magazine and video called On the Go.

I used to write a column for the magazine called "Digging in the Crates" where I would review old records. 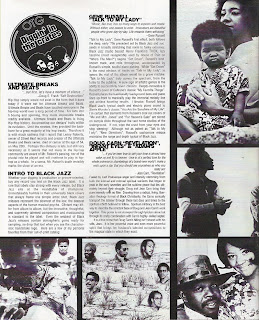 My man Ray who did the video for the magazine thought it would be fresh to have a "digging" segment on one of the videos. We went down to my dude Bob Dickey's old spot in the Italian Market, 9th Street Records, and asked him if we could film the piece. He was with it so I brought a few records from my collection to mix with his stacks. We were going to front like I found them and have me pull them from the stacks and show them to the camera. We filmed the piece and I pulled my joints, which were some heaters. Then they had me go up to Bob to pay for them and he "charged" me $2. It was all a front for the video, but after that there were all these people that started asking me, "Yo man, where is that record store?!? You came up for only $2!!" I would always tell them where it was, but I always fronted that they were on the spot scores. People still ask me about that shit, even though the place has now closed down. That was a really good time!

One more thing…shout out to my baby brother Walker. He got into collecting records when he was real young, kind of on some trying to emulate his big brother shit. One day I'm at the house and he came home from school and said, "Hey Cos, I bought this record today at a yard sale. Isn't it cool?" I looked at the record that he bought and it was Eugene McDaniel’s Headless Heroes Of The Apocalypse. Then I looked at the price tag and it said 50 cents. My brother came the fuck up! Labels: Can You Dig It?, Cosmo Baker, Interview

COSMO IS THAT DUDE