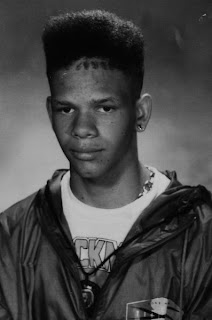 During the first entry in my interview series with J-Zone, J broke down how to sample off of cassette for all of the SP-1200 users out there.  For the second installment, J talks about some of his favorite tapes from his personal collection.  Be on the lookout for Part 3, coming soon.

DJ Sorce-1: Do you have a Top 5 list of rap albums that are only available on cassette. 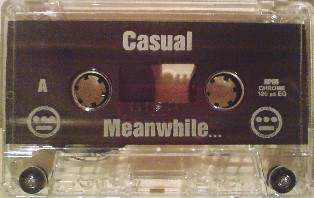 Baritone Tiplove is like J-Zone and Chief Chinchilla or Madlib and Quasimoto before they existed. The real guy’s name is Phil The Soulman. He’s a record dealer from Philly who I bought breaks from in the 90’s. He’s also known as Phil Most Chill. Baritone Tiplove was like the Chief Chinchila or Quasimoto of Phil Most Chill, it was his alter eager. I had never heard Livin’ Foul until 04 when he sent me a couple of cuts from it. When I listened to it I was like, “Yo, I gotta hear this whole thing.” (Editor's Note: You can read Phil Most Chill's write-up on the making of Livn' Foul by clicking here.) People always said that when I did Chief Chinchilla, I was biting Madlib and his Quasimoto album. But in reality, I was biting Baritone Tiplove. I don’t know if Madlib knew about Livin’ Foul, but that was the original Chief Chinchilla or Quasimoto. It was really well produced. I’ll say it on record; it was on the level of The Bomb Squad and Public Enemy in terms of production. Production wise, it was as good as Fear of a Black Planet. A label called Easy Street put it out. I don’t even know if they ever put anything else out. They might have done one or two other releases, but they weren't really accustomed to dealing with hip hop, so they kind of didn't know what they had on their hands. 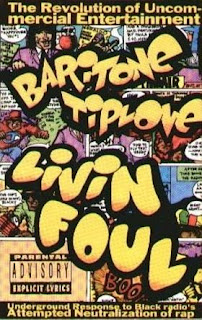 Livin’ Foul came out in ’91. The Biz Markie lawsuit had just happened and that album is chock full of tons of samples. The label basically panicked because of the lawsuits and didn't want to put that shit out on other formats. I remember Phil telling me it had something to do with the samples he used, so they made it some low key shit that was only available on cassette. I can’t imagine that shit getting out of the East Coast at all. It probably came up in batches of one and two in certain record stores, but the cover is so crazy that you would probably bypass it and think it was a joke or something. It just fell under the radar. I’m surprised that record hasn't caught on more with today’s generation that goes back and looks for stuff. It was the precursor to so much stuff that blew up later, whether or not we knew that we were borrowing from it. 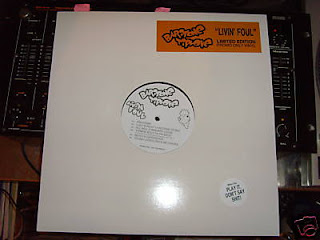 DJ Sorce-1: Obscure regional tapes have become very popular on Amazon and EBay in the last five to six years. Do you have any tapes that fit that mold?

I also have a bunch of regional shit on cassette. The Ichiban label had a lot of stuff that I don’t remember ever seeing on CD. Albums like the 1-5 Posse’s Lifestyles of the Young and Crazy. That had some really good production. I've never seen the CD; I've only encountered the cassette. 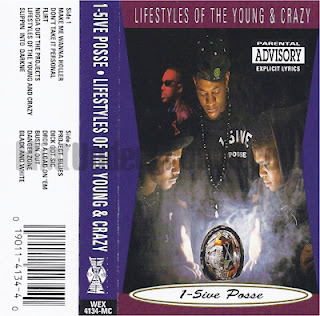 The region that a group came from helped determine the format of an album. By 1991-92, vinyl was becoming strictly a DJ thing. Looking back before that, hip hop albums always came out on vinyl. Then in 91, 92, and 93, CDs really started to take over. Around 92-93, a lot of the albums that came out were promo only for vinyl. The emphasis was on CDs and cassettes, so vinyl production slowed down.

If you take a group like Gang Starr, they were gonna have it on vinyl, because the DJ’s who were into that kind of shit, they requested it. But of you were someone like E-40 coming out with an album in 1994, the single might be vinyl, but you’d do a couple hundred promos of the album on vinyl and that was it. Or they would do what Rap-A-Lot records did with the hot wax, where you’d take the six best cuts that you could play out, and that was it. A lot of those regional groups, if they were coming from someone in the south or Midwest where there wasn't a heavy vinyl culture for hip hop, they might avoid vinyl altogether and only do cassette and CD. 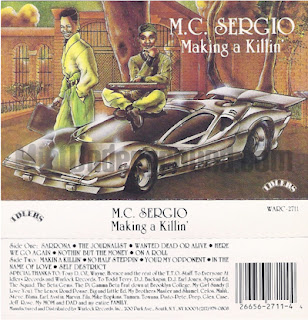 Some of those regional things were only on cassette. It just depends on the region and the time. I have an MC Sergio album that didn't come out on CD. I know Warlock records, a lot of their stuff didn't come out on CD. I don’t think the Krown Ruler’s album did either. The Jungle Brother’s album did eventually, probably because of demand. But labels like that weren't focused on CDs. A lot of times bonus cuts were on cassette and not on vinyl, so you had to get the tape to get all of the songs. 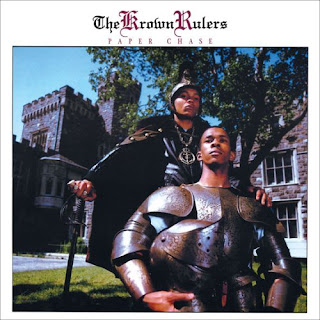 I would say cassettes started to fade in maybe 96-97. The last time I remember everybody buying the tape for something was Only Built 4 Cuban Linx. Everybody called it the purple tape because of its purple shell. Slaughterhouse was yellow, Illegal’s tape was red; those tapes had the color shells. I have Cuban Linx on vinyl. Everybody I knew had the cassette. All the DJ’s had it on vinyl and all of my friends had it on cassette. That was 95. By the times Iron Man and Wu-Tang Forever came out, everybody had the CD. 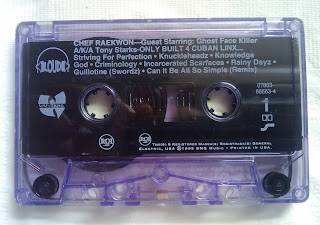 Cars also started having CD players in them. I think a lot of times, the places where we listen to our music steers where the technology goes. I have a 01 Volkswagen with a cassette player and the CD is a trunk loader. It’s such a pain in the ass to put CDs in the trunk that I always listen to tapes in my car, because I can control it, it’s right there. If your car doesn't have a cassette deck, you’re not going go out of your way to buy one. I think cars and portable music players determined what was available to the consumers. It was a domino effect. By 2000, the cassette section of music store was like a piece of one wall of the store. At that point, stores had to look at what was feasible and what people would buy, because they were trying to run a business. A lot of the stuff just got phased out because it was forced out.

DJ Sorce-1: It’s interesting how the popularity of a format goes in waves. Sometimes, I think when media keeps on evolving, people find comfort in defunct media. I’m into movies, and a lot of horror movie fans love VHS horror movies that you can’t get on Blu Ray or DVD. I think some people crave that grimy quality of VHS for the nostalgia it evokes.

J-Zone: Exactly. I have movies on VHS that were never re-issued. It feels like you’re watching it at the time it came out when you pop the tape in. It makes you feel like you’re in 1972 or whenever it came out.


DJ Sorce-1: With defunct forms of media, there is always an issue of maintaining the condition, especially if you actually use it. If you take care of vinyl, it’s pretty durable. I know that with repeat plays cassettes can wear down quickly. Do you convert all of your cassettes to digital so that you have them backed up, just in case?

J-Zone: The valuable ones I do. My last car didn't have a cassette player. A lot of my cassettes, I would run them through Pro Tools, clean them up, make them sounds good, then bounce them down to CD. The car I just got is actually newer than the last car I had and it still has a cassette deck. My 99 Mazda didn't have a cassette, but my 01 Volkswagen has a cassette. So now that I have a cassette player in the car, I've gone back to using tapes. Store bought tapes get worn down so I either dub them to another cassette and use that or make MP3s out of them. For old radio shows and shit, I’ll digitize them. Those can never be found again. 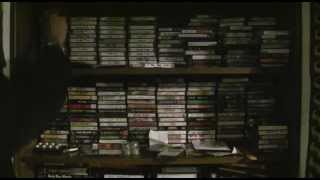 DJ Sorce-1: Like the old Stretch and Bob tapes?

J-Zone: Even some of those, Fat Beats reissued them on cassette. I have shit I've personally taped off of NYU radio and smaller local stations. I gotta keep that stuff...I gotta preserve it. Over years the tape will deteriorate.

DJ Sorce-1: I love people’s crazy stories of digging in a sketchy basement or some crazy person’s house. Do you have any of those kinds of stories about buying tapes?

J-Zone: Most of my stories like that are about records. There is a place in Queens that’s still opened called Breakdown. I've been going there since I was 12. They’re still open. I was actually in there the other day. I got most of my cassette form there. It looks like an old, used record store. There are records all over the place and they have lots of VHS tapes and strange shit. It has a grimy look, but it’s not like Out the Past in Chicago where you’re like, “Oh shit. I’ll get cancer when I leave.” It’s not like that. I got a lot of my tapes from Breakdown. People know I’m into tapes, so whenever somebody is selling tapes or getting rid of them they come see me. But I don’t have any crazy, life is on the line story about tapes. Those are all about vinyl. 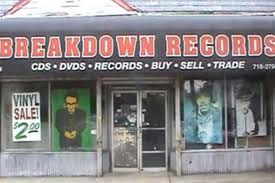